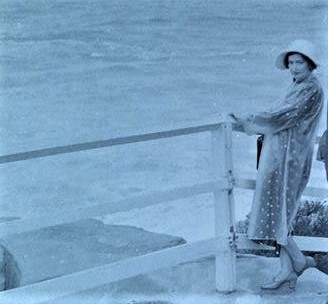 We have a saying in my family: ‘It’s Nana’s fault.’

Nana was highly strung. If you’ve had an anxiety attack, a bout of melancholy, general hysteria or hypochondria or any other disturbance of the mind – there’s Nana. If you’ve had a blazing barney with your lover – Nana strikes again. If you’ve cooked an inedible meal – evidence of Nana’s genetic legacy.

Nana was also a soprano, a costumier, a milliner, a crack-shot at any game requiring fine motor skills. She was imperious, slightly scary, intensely creative – painting, drawing, designing, draping, taping, climbing up the walls of her tiny Coogee flat. Never still. She was just as intensely beautiful, too, tall and long-limbed, and her creamy skin remained unblemished to her final breath.

She could be jealous and manipulative, and a shocking snob.

She was there, at the end of the telephone, sitting quietly while I cried at having miscarried, saying only, ‘I’m so sad for you, my girl.’

She was lovely. She was nuts. My Nana. So very much my model for high-pitched Olivia in The Blue Mile. The woman I recognise instantly in the photograph above: Nana, about the same age I am now. Is she glaring at the lens contemptuously or having a bit of fun? Probably both.

But trawling through Trove, the National Library’s online archives, I’ve just last night found her anew, as a much younger woman. Ivy Mellish, as she was, born in 1906. I was actually looking for someone else – a freshly discovered cousin called Edward who perished in a shipwreck somewhere between Cuba and Brazil the year before, but that’s another story. The Ivy that emerged from my newspaper search of the Windsor & Richmond Gazette seemed suddenly more acutely heroic – and very close.

I’d known that Nana hung out her dressmaking shingle in 1922 at the age of sixteen, frocking and flouncing the ladies of the district. Windsor and Richmond in those days were quaint farming villages on the postcard-pretty Hawkesbury River at the foot of the Blue Mountains, tiny satellites of Sydney, but judging by the volume of press clippings detailing Ivy’s exploits, this was where her star shone its brightest.

She made her public debut as a songstress at the age of ten, taking part in a fundraiser for the School of Arts, in 1916, and across the following decade seems to have done her bit for every fundraiser going: for the hospital, the church, the local Home for the Infirm, the Men’s Sports Club, the Pitt Town Parents and Citizens Association, the Municipal Band, and for cancer research. She gathered talent about her as she grew, organising concerts, musical plays and fashion parades at the Old Windsor Theatre – many of them raising money for worthy causes as well. Her generosity and her craving for the light flutter together from every mention.

But I also learned that Ivy won the writing prize at Windsor Public School, aged fourteen. I never knew she might once have loved words as I do.

Nana. Perhaps my endless, never-still scribbling is your fault, too.