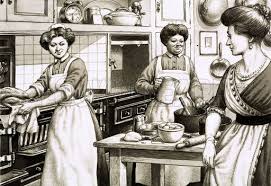 Whenever I set off to discover a particular period and place in history, one of the first things I head for is the food. What a surprise. What did ordinary people eat? I wonder. How did they cook? It’s such an essential part of life and it tells us so much about who we are.

You might have guessed from previous posts that I’m studying Edwardian times in Western Australia right now, and along the way I found this fabulous bunch of recipes in the Great Southern Leader newspaper of January 1912…

Place four ounces of oatmeal, six ounces of sugar, and a lemon cut in slices in a pan. Mix all together with a little cold water, then add a gallon of boiling water. Stir thoroughly and drink when quite cold. Any flavouring may be added instead of lemons.

Melt two ounces of butter in a saucepan, then stir in two ounces of flour, taking care not to let it brown. Add two and a half quarts of white stock, stir, and let it boil for fifteen minutes. Remove the scum as it rises, and season with grated nutmeg and pepper. Beat up the yolks of three eggs in the tureen, and mix with half a pint of milk, then pour in the boiling soup gradually to prevent curdling, and serve.

Select firm, round, ripe tomatoes of equal size. Peel them with a thin, sharp knife (do not scald them to peel them), and handle them as delicately as possible. Cut each tomato into thick slices, but do not separate the slices, so that the appearance of whole tomatoes may be preserved. Just before the salad is to be served, arrange them upon a bed of crisp lettuce leaves and put a spoonful of thick mayonnaise sauce upon each.

Cut thick slices from a raw ham, put them into a frying pan with a small cupful of water, and cook slowly, turning once or twice till the water has evaporated and the steaks are light brown. Dredge lightly with flour. Have ready a sauce made by boiling a teaspoonful of mustard, and a few grains of cayenne. Arrange the steaks on a dish and pour the boiling sauce over them, garnishing the dish with triangular shaped sippets of toast.

These are very appetising and not extravagant, since the remains of beef and ham can be used for them. Take some slices of cold meat, trim them neatly into the same shape and size, and sprinkle each with red pepper and salt. Take as many thin slices of bacon or ham as there are slices of meat, and on to the bacon put a little chopped parsley, a suspicion of anchovy paste, and a few drops of mushroom ketchup. Now put the meat on the bacon, and roll both together; fasten with a skewer. Dip the rolls into eggs and bread-crumbs or frying batter, and fry in deep fat. Serve on a mound of rice stewed in brown gravy.

Stew a knuckle of veal and make it into a strong tasty jelly with all kinds of vegetables, adding a half ounce of isinglass. Season with mace, white pepper, salt, and bay leaf, and a few slices of lemon. Par roast the pigeons, dressed as for roasting. When ready lay them into liquor and simmer slowly until tender. Take a well-soaked mould and line it with the veal jelly an inch thick, then place in the birds (three will he enough). When set pour in more jelly until the mould is full. Lay aside for several hours. N.B.— One bird should be put in first, then the other two side by side, and fill the mould with jelly. Serve with lemons and cayenne.

It’s unlikely that I’m going to make pigeons in jelly anytime soon, and my family would have me committed if I served them anything so dull as that salad or soup, but it’s a great insight into how times and tastes change, isn’t it? I love the changes in our cookery language, too – ‘a suspicion of anchovy paste’, now that’s just so gorgeous I’m going to have to pinch it, aren’t I…