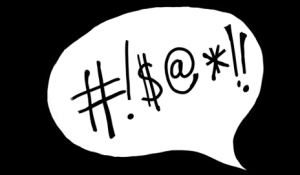 I was recently asked this question by a lovely, curious reader, and it’s one of my favourite kinds of questions.

The short answer to this one is yes, ‘bum’ is a very old word. It can be traced back to the Middle-Ages, and it would certainly have been a rude word for a lady to use in 1900 – as my Berylda does in Paper Daisies. She uses it cheekily, mind the pun, to illustrate how her exposure to the big wide world at Sydney University is destroying her moral fibre.

Etymology is my thing. I love to know where words come from and how they’re used. Whether a word has Latin or Greek or bog Anglo-Saxon roots and how its meaning might have shifted across the ages is a little linguistic turn-on for me. While I always put character and integrity of voice before any stereotypical conception of ‘what people spoke like’ at any time in Australian history, I spend a great deal of time choosing the right words for my imaginary friends and making sure that those words aren’t anachronistically used, or simply weren’t invented at the time in which my characters are speaking. If I can’t find a right word, I might even ask my character to invent something that’s theirs alone.

I could have had Berylda use any number of taboo words to hint at her moral decay – ‘arse’, ‘shit’ or even ‘fuck’ were all words in common use at the time. It’s difficult to prove how common, because these words don’t appear much in written text, if at all, but just because a word is not in print does not mean it wasn’t used. It’s highly unlikely that these words disappeared from general circulation between the Middle-Ages and modern times.

A quick glance at Digger Dialects by W.H. Downing published in 1919, a handy resource on the slang used by Australian soldiers during World War I, will tell you that rude words were fairly popular in the early twentieth century. But you have to read between the euphemisms: it lists P.O.Q. as standing for ‘push off quickly’, and ‘fooker’ as a term to describe British Army privates; it lists F.A. as standing for ‘Fanny Adams’. The dead giveaway is that it also lists B.S. as standing for ‘bullsh’. Just like F.U. in America’s S.N.A.F.U means ‘fouled up’. Hm.

Now and again, though, I’m pulled up by readers who tell me that they doubt my Daniel in Black Diamonds or my Yo in The Blue Mile would have sworn the way I have them swear, and that what they perceive as modern usage spoiled the authenticity of the voices for them. When I point them to Digger Dialects, and other dictionaries of Australian colloquialisms, their eyes glaze over with only more doubt – they simply don’t want to believe it.

And that’s fine. We all bring our own prejudices to language – to the way we speak ourselves, and to the way we think others should express themselves. But as an obsessive listener to language, the fascinating thing for me is, our individual idiom is as unique as everything else about us – from our fingerprints, to our experiences of life. Some people spout profanity liberally; others, like my grandmother, only occasionally but very effectively use the word ‘bum’. Berylda uses the word ‘bum’ then because, like my grandmother, she is a lady, not a soldier or a miner or a labourer on the Sydney Harbour Bridge.

It’s a word of unknown origin but in its earliest medieval appearance it meant what it means today – your backside. It was possibly an onomatopoeic word for the dull thud that portion of the body makes when one falls down upon on it, or perhaps the sensation evoked when one fondly pats another there. Yes, I just made that up, but really – who knows? It seems a word that has always held a hint of a giggle. We do know, though, that by the mid nineteenth century it meant a ‘tramp’ or a ‘time-waster’; it also meant ‘poor quality’. It seems it’s always been a fairly tame word on the rudeness scale.

For Berylda, though, it means much more than all this. By using it, she is stealing a word from the world of men, however tame, as she dreams of independence and self-determination at a time when it was denied to women. Tiny and almost sweet as the word is, it’s one of protest. It’s precisely the word that Berylda would use.