SEEING THE FOREST FOR THE TOOTHBRUSHES

I once had an historian tell me, in that sternly confident way some academics have, that the toothbrush was uncommon in Australia in the early twentieth century. This was in criticism of my first novel, Black Diamonds, specifically coalminer Daniel Ackerman’s obsession with keeping a good set of pearly choppers in his head throughout the Great War.

I knew, from my research of everyday life through the newspapers of the time, that the historian’s claim was a little bit of bosh. Toothbrushes were perhaps not necessarily a popular item among working men, who might prefer to spend their play-money on other things, like grog and tobacco, but they were as common as shaving soap, razors, tweezers and all manner of accoutrements men require to keep themselves nice, if the advertisements for and general references to them at the time in question are to be believed. In fact, toothbrushes seem to have been a handy vanity-case item for chaps back to the gold rush days of the 1850s and 60s; the one pictured above, sans horsehair bristles, is dated at 1880 and was one of several found during the excavation of an old working-class area of inner Melbourne.

Most astonishingly, for me, the historian somehow failed to note in the reading of my work that not only did Daniel not drink or smoke, he was rather a vain specimen, and quite obviously so. He is someone who comments on others’ lack of dental hygiene; just the kind of bloke who would, although injured in every way, wander around London in 1917 searching for a toothbrush to soothe his wounded soul.

Because this is just what some people are like, regardless of the historical period in which they lived, or the class or race they were born into. Not everyone fits neatly into the textbook tropes of their times, and to various extents all of my main characters are these kinds of odd-bod people. I work quite hard to make them seem alive and authentic, rather than cardboard cut-out facsimiles propped against cliché or myth, or conformist regurgitations of accepted constructs.

And this is why reading history is not usually my first port of call when it comes to research. We all have our prejudices and agendas, no matter how we might strive for objectivity. Even the most meticulously intellectually distanced historian is a filter rather than a conduit of information. Research is fossicked, sliced, diced, shrunk here and magnified there. And bless their cotton socks for all the work historians do. Well-written, well-researched history is a massive pleasure-read for me. Finding and then processing vast amounts of disparate material and presenting it for human consumption is no easy feat. Without historians, we would have no halfway trustworthy mirror to ourselves and our past at all.

But it is often a foggy mirror nevertheless, and an historian whose political bias causes them to misread the symbol of a toothbrush in a Great War novel is a case in point. My novel wasn’t underscoring this particular academic’s own research on the working class of the period as largely helpless against the great millstone of capitalism, constantly grinding them down into poverty, filth and despair. It is entirely possible that they didn’t come across too many toothbrushes along this line of enquiry. And, ironically, it blinkered them to the fact that my character was actually holding his toothbrush aloft the great unwashed as he might do the red flag. This was his power; his greatest tool in walking the rope between individual and collective good, a light upon the road to successful democratic socialism in Australia. I exaggerate wildly.

Daniel’s toothbrush was actually inspired by two working-class war veterans who walked in his world: one, a coalminer from the Illawarra who, when asked to reflect on his greatest achievement in life, said it was holding onto his hire-purchased piano during the Great Depression; the other, a young Sydney tradesman whose curious fastidiousness about himself throughout the experience of war seemed to help him deal with the horror of it. The point is, people – real people – surprise you, and make you think.

Is this just a misplaced toothbrush, or is it something more…? 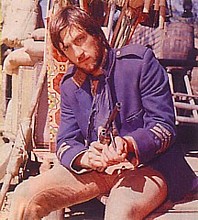 As a kid I was hopelessly in love with John Waters when he played Sergeant-With-A-Past Robert McKellar in the TV series Rush. I don’t think I’ve ever got over it. So, ultimately, it’s his fault I’m now knee-deep in the midst of a goldfields novel rife with bushrangers and troopers and an outrageously spunky hero with sexy eyes.

No, I tell a fib here. It’s not all John Waters’ fault. I had a crush on Jon Finch, too – the guy who played Ben Hall in the eponymously titled and like bushranging series. I think I probably had a crush on Sigrid Thornton as well, from All the Rivers Run. So, I must admit it, I had a crush on the whole 70s and 80s ABC Aussie period drama extravaganza.

Which has all undoubtedly been a massive influence on my obsession with Australian history today, thanks Aunty. I am happy as a little piggie gorging on 1860s research right now. I can’t get enough of crinolines and corsets, cartwheels, bullock drays and Dean & Adams five-barrel pistols – and all the bizarre and long-forgotten place and pub names I’m finding peppered through the Central West of the times. Just who would call a town Frying Pan or a pub the Hen & Chicken and why are but a few of the many deliciously unfathomable questions my fossicking has unearthed for me.

But I’m taking a couple of scary flying leaps with this new novel as well. It will be the most comic of all of my stories so far – a tale of mistaken identity, a breakneck rollicking picaresque full of parody and pokes in the ribs of all sorts. This kind of old-fashioned comedy requires a steady hand, cool control, and I don’t know yet if I can pull it off.

It’s also the tale of two characters who are, in several important ways, more culturally ‘other’ than any of my characters so far – people whose personal histories and experiences are worlds apart from my own, in an Australia that at times I hardly recognise. This is terrifying. But it’s also where my heart is driving me, to say some things I need to say about bigotry and prejudice that remain with us today, and so I have no choice but to go there. And see where we end up.

I’m halfway through the adventure now anyway – no turning back, no hanging up the saddle, no looking away from them dang sexy eyes.