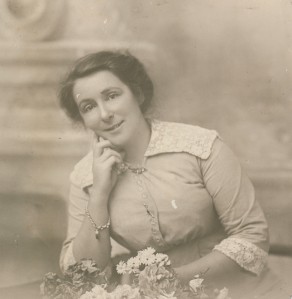 This dreamy dreamer, smiling above her table arrangement of daisies, is Esther Miriam Schwebel, my great grandmother. I guess this photo was taken in the early 1900s, when she was a busy mother of four, somewhere in Newtown, in inner city Sydney. She was born in 1870 but I’m not sure where. Other than that, I don’t know very much about her.

As a child, I was always aware of her existence; I knew that she was Jewish, of Polish heritage, and that her maiden name was Miers. I don’t remember any particular stories having been told about her, but she was someone somehow exotic to me.

About five years ago, I was intrigued to discover through a distant relative, who was researching our shared Miers history, that Esther had been a writer. No author of note, but she’d written a story or two, it was thought. Where these stories might have appeared, though – in a private journal or newspaper or magazine – no-one seemed to know.

Every now and again, I’ve done a trawl through the National Library’s Trove database looking for her, searching rags such as The Dawn, and the women’s pages of all sorts of publications. But found nothing.

When I was recently contacted by another distant relative, a lovely woman called Andrea with whom I share this great grandmother, I asked her about Esther’s writing too, but she didn’t know anything about it. Andrea did send me this beautiful photograph of Esther, though – and it made me delve back into my small but incredibly untidy family archive for another wistful, hopeless hunt.

Imagine my surprise then when I found, stapled behind a mundane scrap of family tree, a poem, dated around 1910, and attributed to none other than our Esther. It’s a photocopy of hand-scrawled verse, and largely indecipherable, as you’ll see below. What am I to make of lines such as:

In the air shall be seen
In White, in Black & Green
From in the water shall float
As easy as a wooden boat
Gold shall be found on…

What? Where’s the gold? And is this even what the lines say? The last of them is obvious, however, and ominous: And the world to an End shall Come in 1881. What the freak? Who transcribed the poem, and what does it all mean?

It’s an untidy nest of mysteries designed to taunt me, a treasure map made of invisible ink – that’s mostly what it means.

It’s far from unusual, of course, that snippets of our creative lives get tossed out or lost after we move on from this world – especially the snippets of women.  Our diaries and notebook scribbles, our love-splashed recipe cards, are probably among the first to go, when our grief-addled children are forced to sort through all our decades of junk.

And so I make a promise to my own children now: any poem of mine, any piece of work I value, any thought I want to leave behind, will be typed up and copied to my hard-drive, fellas. Thanks for the shove along, Great Grandmother Esther. Perhaps that’s the only meaning I really needed to receive. 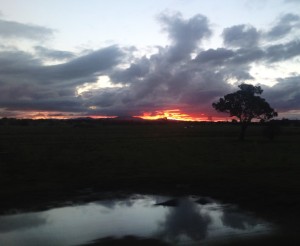 WORN
Unmended, yet reliable
As the plot points of romance
Turn ever to the sun,
This thread pulled in my cardigan
Is a vein of gold
Held up to the light
And settled on my shoulder.
Raised to my chin
Now and again
To catch some scent of days
Softened with age,
Even grief
Smeared into the sleeve,
Each awful cigarette,
Remains somehow
Just there, barely,
But enough to warn:
Don’t do that again.
Too many things to learn instead,
To feel through the rent:
My forever funny babies,
Buttons clicking against the bath;
My lover ever heroic,
Stretching the knit to tug me home;
My kiss ever more tender;
My laughter richer.
For what else should I want to leave
When I am gone?
Lay it under glass then
And hang it in a hall,
This old cardigan. 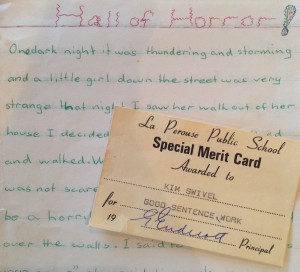 ONCE UPON A TIME – SORT OF

Memory is such a tricky fish. I love the way it comes for me in pictures, scents, the echo of words. A smile. A shiver. The flicker of something elusive. Something forgotten.

It’s this everyday quest to remember that drives so much of my writing. How we mark the past, understand events and make heroes and villains of people, how we interpret history and piece together narratives from its soup gives shape to who we think we are, who we want to be, the hopes and values that make us us as a bunch, and individually.

But it’s a quest that comes laid with traps – disguises, lies, mirages, dead ends and precipice edges – that only grow in number and trickery over time. Memories are nothing if not utterly untrustworthy characters.

I met a lovely one of these a couple of days ago, going through a long-neglected box of bits and pieces my mother had kept from my childhood – scraps of schoolwork, letters, cards, theatre programs from my old tap-dancing days (best forgotten).

In among it all, I found my very first attempt at writing a story. It’s most definitely my handwriting, possibly from around year five or six – I’d have been about ten or eleven when I penned it. But the thing is, I don’t remember having written it at all.

I remember the story sparklingly well. I remember sitting in the cold, shady area at the front of La Perouse Public School at lunchtime and marvelling at it, wide-eyed. But in my memory, it’s my friend Diana Hoffmann who is writing it. She was a master horror story teller – her parents let her stay up late on Saturday nights to watch films like Dracula and Frankenstein. They were German and had a black Labrador called Fritz who could fart for Deutschland.

I’m doodling drops of blood around the margins of her story, and wishing I could invent one as fabulous as hers.

There’s not a writing day goes by that I don’t remember it was Diana who somehow switched me on – showed me some magic, shone a light up the path of how stories are made. I’ve always wanted to thank her for this, but we lost touch after going separate ways in high school, and I’ve never been able to track her down.

I still can’t quite believe that I had a crack at writing such a Diana-inspired tale myself. But here it is, in green and red. It’s only three pages long, abandoned before it was really begun. But it is the very beginning of all my scribbling days. Where did I write it? In secret, in my bedroom? How did Mum get her hands on it? How is it that even at this tender age I seemed destined to bring a bit of weird kid to cliché?

Does it matter that my memories tricked me into thinking that this story was Diana’s alone? No. What matters is that somehow I am forever honouring what she gave me.

I wish I could tell her this. I wish we could share a laugh, reminisce. But in lieu of that, and until we do, I’ve framed the front page of my ‘Hall of Horror!’, along with a merit award for ‘good sentence work’, which I don’t remember ever having received either, and I’ve sat it on my desk as fact. Evidence of how fragile, how precious our memories are. And a reminder that the quest for catching the truth in them is one that’s always worth making.